Want to know about screen resolutions, and why do they even matter? Read on, you’ll know why.

What Exactly Is Display or Screen Resolution?

To check what resolution your screen is, you can use this free tool.

The size of the screen is also important in addition to the resolution. The size of your screen is measured by its diagonal. An inch is equal to 5″, 10″, etc.

It isn’t directly related to the size or the resolution of the screen. Suppose you had a 10.6″ tablet and a 24″ desktop monitor having 1920 x 1080 resolutions. Both devices have the same resolution, so they can display the same image. It’s just that due to the larger physical dimensions of the computer monitor, the image will appear much larger on the screen.

In addition, the larger sized image will appear blurrier since dots will be closer together.

It is also possible to have different resolutions on two monitors despite the same physical dimensions. This resolution will allow you to fit content on one screen when using the higher resolution monitor. Due to the shorter distance between pixels, the images will be smaller but still sharper. 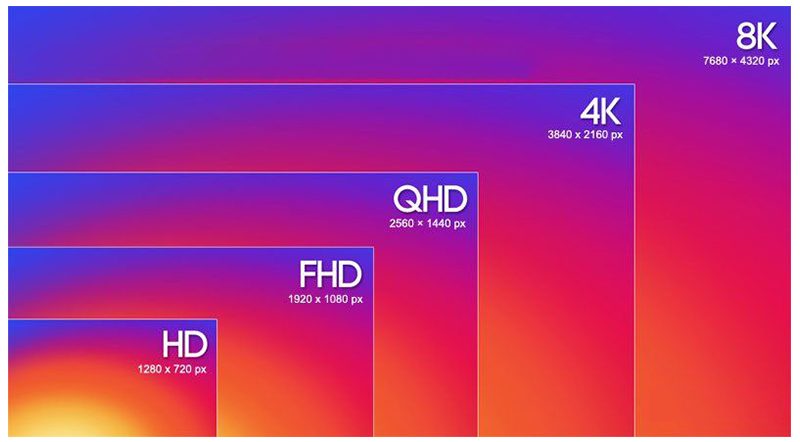 Manufacturers developed a means of describing display resolution when high-definition TVs become common. A typical number seen on a computer monitor is 720p, 1080p, 1140p, or 4K. Likewise, the “p” or “i” indicates whether it is an interlaced or progressive scan display.

A computer monitor can display a higher definition display than a TV, which is one reason these shorthand numbers are also used for computers. Display numbers always refer to how many horizontal lines there are on a screen.

Usually seen on gaming monitors and on high-end smartphones, 2560 x 1440 is referred to as Quad HD. The resolution of 1440p is four times that of 720p HD. To confuse matters even further, many premium smartphones come with a 2,960 x 1440 resolution that falls within 1440p.

UHD, 4K, and Ultra HD are terms commonly used to describe this resolution. It  is found in premium TVs and computer monitors, and it has a large display resolution. As the width approaches 4000 pixels, 2160p is called 4K. Thus, there are four times as many pixels in 4K HD as in 1080p FHD.

To check if your computer is capable of rendering a 8K video, here’s a test video for you to watch:

A 2K resolution is a 2048 x 1080 resolution in cinematography. Consumers, however, would consider it 1080p. Furthermore, some display manufacturers call displays with a horizontal resolution over 2000 pixels “2K” when they really have a resolution of 2560×1440 or more. In this case, the resolution is 1440p, not 2K, because the settings for this device are 1440p or Quad HD.

The term 2K resolution applies to a TV, monitor, smartphone or tablet, and it is misleading to think it applies to these devices. Probably 1440p or quad HD is the real resolution.

On smaller screens, you might worry if a video in high resolution can be seen. Can 720p TVs display 1080p videos? Yes, indeed! Any video can be viewed, regardless of the resolution (high, medium, or low) of the screen. Your device converts the video’s resolution to fit the resolution of your display if the video has a higher resolution than what your display offers. Downsampling is one method of doing so.

In the case of a 4K resolution video, for example, if your screen can only show 720p, the video will show at 720p.

A screen’s orientation determines the way that you view it: landscape and portrait are the most common screen orientations used today. A landscape-orientated display has more width than height, whereas a portrait-oriented display has the opposite.

Our computer, laptop, or TV screens, as well as many others, are most often landscape oriented. Our smartphones, for example, have smaller screens that we typically use in portrait mode, but, since they can be rotated easily, they can also be used in landscape mode.

A screen’s aspect ratio describes how long its long side is compared to how short its short side is. Therefore, when you look at a landscape screen, the aspect ratio indicates what the width to height ratio is. The aspect ratio is not used to describe screens (or any rectangular shapes) in portrait mode.

How Does Screen Resolution Benefit You?

The more the screen resolution the better, as you have probably already concluded if you have read this far. This isn’t always the case.

If two identical screens were of the same size, the screen that has the higher resolution showed more and required less scrolling. It is also sharper.

As a consequence, the image will become smaller as well. The strain on your eyes may make you want to zoom in on the picture. This results in a lower resolution and less screen display. Why get a high-resolution device if you can’t use it properly?

Smaller devices like smartphones and tablets are especially susceptible to this. In addition, we’ve discussed whether or not 4K is necessary for your phone’s  display.

Since it is available, you may think you shouldn’t pass it up even if you don’t truly need it. Several reasons explain this. Money is one of the main reasons. No matter what size the screen is, high-resolution screens are more expensive.

Another reason is a bit more technical in nature. The resources required for high resolution are higher. When you set your screen to 60Hz, the frame is refreshed 60 times a second by the video card. It is not common for people to use 60Hz, and if possible, they prefer 120Hz refresh rate or 144Hz. Video cards are stressed more by higher resolutions. There’s a lot of refreshing going on because each pixel updates simultaneously. A higher strain is associated with more pixels.